Breaking news: Evanger’s reveals presence of horse DNA in its Hunk of Beef dog food in a Wednesday letter to its customers. The company will recall all of its Hunk of Beef, Braised Beef Chunks with Gravy and Against the Grain Pulled Beef. The formal recall announcement will be issued this week.

Consumer complaints continue as the FDA digs deeper into operations at Evanger’s pet food after discovering evidence that none of the company’s meat suppliers are registered with USDA. Evanger’s owners blamed their suppliers and the FDA in the wake of findings that their dog food contains a barbiturate used to euthanize animals.

At least one dog has died and at least four others required medical attention after eating Hunk of Beef canned dog food from Evanger’s Dog & Cat Food Company Inc., which is owned by the Sher family. Evanger’s and Nutripack LLC, another pet food company owned by members of the same family, have recalled certain lots of certain flavors of their canned dog food.

“The guilty party has turned out to be one of our most trusted meat suppliers. A USDA-APHIS inspected supplier who we had done business with for over 40 years, and whose plant we had visited numerous times over the years,” said Evanger’s owners Holly and Joel Sher in an online statement posted Sunday. “We have taken it upon ourselves to lead the campaign to force the FDA to put an end to allowing drugs like pentobarbital to enter the raw material stream and contaminate our pets’ food and endanger their lives.”

Officials with the Food and Drug Administration do not agree with the company’s contention that the agency is responsible for the pet food being contaminated.

“The detection of pentobarbital in pet food renders the product adulterated in violation of the Federal Food, Drug, and Cosmetic Act. Therefore, it is not acceptable to use animals euthanized with a chemical substance in pet or animal foods,” an FDA spokesperson said Tuesday.

“Further, it is the responsibility of the pet food manufacturer to ensure that the food they produce is safe for consumption and properly labeled. One way that a manufacturer can do this is by taking steps to verify the identity and safety of the ingredients they receive from their suppliers.”

During the course of their investigation, FDA inspectors discovered a bill of lading from Evanger’s supplier, which listed “Inedible Hand Deboned Beef – For Pet Food Use Only. Not Fit For Human Consumption.”

While FDA cannot reveal the identity of the supplier, an agency spokesperson described it as one that, “…provides materials from animals that are not fit for the human food supply, for a variety of reasons.”

Evanger’s sources the meat for its pet food from more than one supplier. According to the FDA spokesperson, the agency’s “… preliminary assessment indicates that none of these suppliers are USDA-FSIS registered facilities.”

Those findings are in direct contrast to statements from Evanger’s and Nutripack LLC about their pet foods, which they say are made with human-grade food. FDA inspectors also found incomplete information on Evanger’s brand and Nutripack’s Against the Grain brand production records.

According to FDA, inspectors were unable to determine from company records whether any of the beef that was used in the recalled Evanger’s and Against the Grain production lots was also used in any other products. In a letter to its customers released Feb. 21, Evanger’s indicated the recall could be expanded to include all products containing chunk beef, “out of an abundance of caution.”

The investigation so far

In conjunction with the advisory, FDA released two Inspectional Observation reports — Form 483 reports — which detailed the conditions found by the agency’s inspectors during visits to Evanger’s production facility in Wheeling, IL, and to the facility belonging to Nutripack LLC in Markham, IL.

The Wheeling operation had last been inspected by FDA in November 2012. According to a spokesperson with FDA, the Illinois Department of Agriculture performed an inspection in 2016 and classified the Wheeling facility as ‘No Action Indicated.’ However, the plant was not operating at the time, and the inspector was unable to observe the normal day-to-day activities. Nutripack had not been inspected either by the state or by the FDA prior to February 2017.

The USDA’s Food Safety and Inspection Service (FSIS) is the federal agency tasked with oversight and inspection of slaughterhouses and meat processing operations. To be deemed “Fit for Human Consumption,” any meat that enters interstate commerce must have been produced under USDA-FSIS supervision. Slaughterhouses and meat processing operations that do not engage in interstate commerce come under the supervision of the department of agriculture in their home state.

Evanger’s is a private company, incorporated in Illinois. Its President and Agent of Record is Holly Sher, who owns the business together with her husband, Joel Sher.

Nutripack is a Limited Liability Company registered in Illinois. Its Agent of Record is Brett Sher, son of Joel and Holly Sher. Nutripack is managed by Sher Services Company Inc. Joel A. Sher is both the agent of record and the president of Sher Services, while Holly Sher is the secretary. The Against the Grain trademark is registered to Chelsea Sher, daughter of Joel and Holly Sher. Chelsea Sher also is listed as Secretary of Evanger’s.

In their online letter Sunday, the Sher family’s reference to their supplier having been “USDA-APHIS inspected” suggests they may not understand what agencies have jurisdiction over their pet food operations.

According to the USDA website the primary role of APHIS (Animal and Plant Health Inspection Service) in the U.S. food safety network of agencies “is to protect against plant and animal pests and diseases. APHIS also administers the Animal Welfare Act and carries out wildlife damage management activities.”

On the other hand, according to USDA, the FSIS is “responsible for ensuring the safety and wholesomeness of meat, poultry, and processed egg products and ensures that it is accurately labeled.”

As its investigation continues, FDA reports it has received additional complaints from consumers who fed Evanger’s Hunk of Beef to their dogs, in some cases exclusively.

As consumers tend to throw out or recycle empty cans, obtaining specific lot number information has been difficult. The agency continues to encourage consumers to report problems with Evanger’s products through the Safety Reporting Portal or by contacting a Consumer Complaint Coordinator. Additional information is available on the FDA web page, How to Report a Pet Food Complaint.

This story first appeared on Food Safety News and is reposted here with permission. 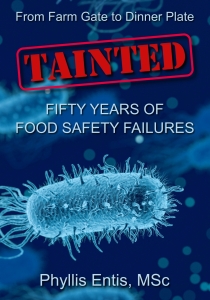