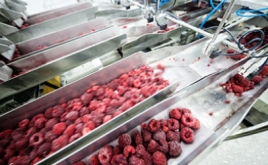 According to MAPAQ, the raspberries used in the cakes were imported from Chile.

The outbreak details were provided to eFoodAlert by MSSS in response to an email request.

Although the MSSS refers to the outbreak cases as gastroenteritis of possible viral origin, related recall notices refer specifically to Norovirus.

Symptoms appeared within 24 hours and consisted of diarrhea, nausea and vomiting. None of the outbreak victims were hospitalized, and none consulted a doctor.

MSSS has alerted its provincial and federal counterparts, and is not aware of any related case reports from regions of Québec or other parts of Canada.

The Public Health Agency of Canada (PHAC) has not replied to eFoodAlert’s request for information.

Both the Ministère d’Agriculture, Pêcheries et Alimentation de Québec (MAPAC) and the Canadian Food Inspection Agency have posted recall notices for raw, frozen raspberries and for other food items made from the implicated raspberries.

Consumers and food service workers should discard or return any items that appear on the recalled products lists.