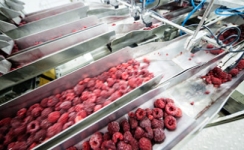 Frozen raspberries imported from China were the source of 615 confirmed cases of norovirus in Quebec between March and July of this year, and of 15 cases in Minnesota in August of 2016.

The Quebec outbreak included clients and staff at seven seniors’ residences, two daycare centers and one hotel in four separate administrative regions of the province, according to a spokesperson for Quebec’s Ministry of Health and Social Services (MSSS).

Of the 615 outbreak victims, 141 were employees of at least two of the seniors’ residences. Four were employees at one of the affected daycare centers. Citing privacy concerns, MSSS declined to provide any further details on the victims by gender, age or geographic location. However, extrapolation of data provided by the provincial health agency suggests about 250 of the outbreak victims were seniors, and 33 were children.

The Minnesota outbreak was linked to ice cream manufactured by Sebastian Joe’s, a Minneapolis-based company, according to a spokesperson from the Minnesota Department of Health (MNDOH). The company supplied the ice cream to multiple venues within the Minneapolis-St. Paul area.

Norovirus illnesses were linked to consumption of raspberry chocolate chip flavor ice cream consumed at two Sebastian Joe’s venues, one private gathering, and one area restaurant. Of the 15 confirmed cases, 10 were female. One person was hospitalized.

The ice cream contained frozen raspberries imported from China. Analyses conducted by the Food and Drug Administration confirmed the presence of norovirus matching the case specimens in samples of the raspberries.

The Twin Cities and Quebec outbreaks occurred more than six months apart and appear to have been independent of each other, though frozen raspberries from China were implicated in both. Taian Runko, the company identified by the FDA during its analytical sampling, was not involved in the Quebec outbreak, according to the CFIA.

The Canadian Food Inspection Agency (CFIA) issued 14 recall notices, from June 20 through Aug. 21 this year. The agency disseminated 11 of the recalls only to businesses in the food industry, with no public warning released. Recall notices dated Aug. 11, 16 and 21 were released to the public, and alluded to the existence of “…reported illnesses associated with the consumption…” of the recalled products.

From June 23 through Aug. 14, Quebec’s Ministry of Agriculture, Fisheries and Food (MAPAQ) issued a series of six public alerts and product recalls, which included numerous bakery products manufactured with the individually quick frozen (IQF) raspberries. Each of the MAPAQ alerts warned of “many” illnesses associated with the consumption of products containing the IQF raspberries.

The U.S. Food and Drug Administration carried out analytical sampling and laboratory analysis when advised of the Minnesota outbreak, according to an agency spokesperson. As a result of the FDA investigation, the agency added IQF raspberries from Taian Runko Industry International Trade Co. Ltd. to the Import Alert 99-35 “Detention Without Physical Examination” list (Red List) on May 2 this year. Sebastian Joe’s initiated a product withdrawal as a result of the 2016 Minnesota outbreak.

Canadian health agency never issued alert
The Public Health Agency of Canada (PHAC) never issued a public health alert in conjunction with the IQF-raspberry norovirus outbreak. A spokesperson for PHAC explained the agency’s silence was because of the outbreak having been confined to a single province.

In Quebec, the provincial health department responsible for investigating the 5-month outbreak did not issue any news releases or public health alerts either. According to a MSSS spokesperson, food recalls are the responsibility of MAPAQ and CFIA. The spokesperson added that MSSS worked in collaboration with MAPAQ and other federal authorities on the investigation.

The first public notice of the Quebec outbreak was contained in a public warning and recall notice issued by MAPAQ on June 23. The CFIA did not include a similar warning with its recall notices until Aug. 11.

No public health alerts were posted on the Minnesota Department of Health website regarding the norovirus illnesses or ice cream recall in that state.

What consumers should know about norovirus
Norovirus is the leading cause of outbreaks from contaminated food in the United States, according to the Centers for Disease Control and Prevention. It accounts for approximately about half of all foodborne illnesses in the country every year.

Symptoms of norovirus infection include nausea, vomiting, diarrhea and stomach pain. The symptoms usually develop within 12 to 24 hours after exposure to the virus and last one to three days days.

Although extremely unpleasant, most cases of Norovirus are self-limiting, and do not present a long-term health risk, according to the CDC. Nevertheless, seniors and young children are at heightened risk of severe dehydration if infected with the virus.

Most cases of norovirus illness in the population at large are shrugged off as so-called stomach flu. Victims are usually not seen by doctors, and the infections go unreported.

A national survey carried out in the United Kingdom in 2011 determined that only one in every 23 people with norovirus consulted a physician. Overall, for every 288 cases of norovirus occurring in the general population, only one was reported to national surveillance authorities.

March-May 2017: Three separate outbreak clusters involving six seniors’ residences, all of which were serviced by a single central kitchen.

May 31, 2017: CFIA is notified by Quebec authorities that norovirus outbreak clusters appear to be linked to raspberries, and initiates a food safety investigation.

June 2017: Two additional outbreak clusters occur, one at a daycare center and the other at a hotel.

June 23, 2017: MAPAQ issues first consumer alert and recall notice for IQF raspberries and some products containing the raspberries, reporting for the first time the existence of “many” illnesses associated with consumption of IQF raspberries.

July 2017: Two additional outbreak clusters are reported, one at a daycare center and the other at a seniors’ residence.

This story first appeared in Food Safety News and is reproduced here with permission.

One thought on “Outbreaks in Quebec, Twin Cities Traced to Chinese Raspberries”