Anyone who has stayed in one of the high-end Israeli hotels will know instantly what is  meant by an “Israeli breakfast.” At it’s best, it is opulent and can fuel an entire day’s tourist activities. Even modest Israeli hotel breakfasts put to shame the ‘complimentary’ breakfasts offered by hotel chains in the USA and Canada.

When my husband and I applied to renew our US passports several weeks ago, we decided that our first trip with the new documents would be to Israel. As soon as the passports arrived in the mail, we solidified our plans.

Our only previous visit to Israel was twenty-three years ago, and I could still recall the sight, smell and taste of those Israeli hotel breakfasts, complete with several choices of egg dishes, a variety of salads, sweet melons and juicy oranges, freshly baked breads and rolls, and decadent breakfast pastries.

We landed at Ben Gurion Airport on the evening of October 3rd, and took a taxi directly to the Orchid Okeanos Boutique Hotel, situated right by the beach in Hertzliya. Following an abbreviated night of sleep, we arose, eager to begin the day with one of those amazing breakfasts.

The offerings at the Orchid were neither opulent nor decadent by Israeli hotel standards. Nevertheless, we partook of freshly squeezed orange juice, freshly baked rolls and croissants, smoked salmon, halvah, and fresh melon. I drank cappuccino and my husband, who is not partial to coffee, opted for soy milk.

We decided to work off some of the calorie intake by walking to the car rental agency offices, some twenty minutes away. An hour or so after breakfast, while we were waiting our turn at the car rental desk, my husband became violently ill. Volunteer first responders from the Magen David Edom arrived at the scene with incredible speed, followed a few minutes later by an ambulance.

We spent the rest of the morning at the ER of the closest hospital. Fortunately, the doctors could find nothing organically wrong, and my husband recovered quickly. As we rode our taxi back to the hotel, I began to suspect he had been the victim of Bacillus cereus food poisoning.

Bacillus cereus (B. cereus for short) is a multi-talented, spore-forming microbe. One of its talents is the production of an enterotoxin – a heat-stable protein that can trigger vomiting in as little as thirty minutes after ingestion. 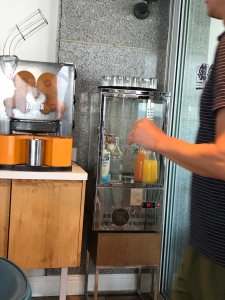 For the microbe to multiply in a food sample and produce its toxin, the food must be held at room temperature for several hours. But the soy milk – the most likely culprit – was kept in a small refrigerator in the breakfast room. Might the refrigerator have been defective?

We had our answer the next morning when I reached into the refrigerator and discovered it to be at room temperature. The LED status display on the front of the unit was flashing “OFF” in bright red letters.

With Israel’s reputation as a world leader in so many areas of medicine, science, and technology, it is easy to forget that this is still a third-world country in other respects. I have since learned from a reliable source that Israel is not equipped to test food for bacterial toxins. Test kits for these toxins are readily available and are relatively easy to use. This is not rocket science.

We allowed ourselves to forget that we were in the Middle East. I let down the food-safety guard I always have maintained during our travels to places such as Myanmar, Thailand and Bora Bora. And my husband suffered the consequences.

Don’t make the same mistake we did. Follow these safety rules whenever you travel, especially to third world countries.

1. Do not drink the water or use ice in your drinks;

4. Be very cautious about the food you select from a buffet; and

5. Be watchful of holding temperatures for perishable foods.

By following these rules, you will miss some interesting taste experiences, but you will be more likely to remain healthy to enjoy the rest of your trip.

Smucker Foods of Canada Corp. initiated a recall after the product was linked to an outbreak of E. coli O121 that has sickened 25 people since mid-November 2016. All 25 outbreak victims were infected with the same genetic strain of E. coli O121. The recalled product was sold in Alberta, British Columbia, Manitoba and Saskatchewan.

Six individuals were hospitalized; all six either have recovered or are recovering from their illnesses. The youngest victim was eight years old, and the eldest was 79. Fourteen men and 11 women are among the 25 victims. There have been no deaths.

Cases were reported in British Columbia (12), Saskatchewan (4), Alberta (4) and Newfoundland and Labrador (5). The Canadian Food Inspection Agency (CFIA) advises that their ongoing investigation may lead to additional product recalls.

The Public Health Agency of Canada (PHAC) and CFIA remind consumers that it is not safe to taste or eat raw dough or batter, regardless of the type of flour used, as raw flour can be contaminated with harmful bacteria such as E.coli.

Symptoms of E. coli infection can include severe stomach cramps, watery or bloody diarrhea, vomiting, nausea, and headache, and last 5-10 days in most cases. Typically, there is little or no fever.

PHAC urges the public to take the following precautions: