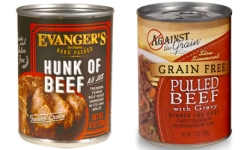 On February 3, 2017, Evanger’s Dog & Cat Food Co. announced a recall of specific production lots of its Hunk of Beef au Jus canned dog food after pentobarbital was confirmed in samples of the product.

One month later, the company expanded its recall to include every batch of Hunk of Beef, Braised Beef and Against the Grain Pulled Beef canned dog foods manufactured between December 2015 and January 2017.

FDA categorized the recalls as Class I.

A Class I recall represents “a situation in which there is a reasonable probability that the use of or exposure to a violative product will cause serious adverse health consequences or death.”

More than two years later, these Class I recalls are still listed as “Ongoing” by FDA.

A series of email exchanges between Evanger’s, its attorneys, its consultants and FDA staff, released in response to a Freedom of Information Act request, offer a glimpse into the prickly relationship between Evanger’s and FDA.

The story began on December 31, 2016 when Nikki Mael gave her five dogs a New Year’s Eve ‘treat’, consisting of most of the contents of a can of Evanger’s Hunk of Beef au Jus dog food. Within 15 minutes, the dogs began to behave oddly, exhibiting acute neurological symptoms. The pet owner rushed her dogs to an emergency veterinary clinic, where one of the dogs died.

Lab tests conducted on stomach contents retrieved during necropsy of the dead dog revealed the presence of a large amount of pentobarbital, a drug used to euthanize animals. The same drug was found in the residue of food remaining in the can from which the five dogs were fed.

FDA, alerted by the veterinarian, launched its investigation into the incident, including an inspection of Evanger’s production facilities that began on January 10, 2017.

According to a February 4th email from Evanger’s to FDA, the agency first advised Evanger’s of the results of the necropsy on January 27th.

Evanger’s management protested FDA’s handling of the incident. In a series of emails, the company questioned FDA’s determination that pentobarbital was an adulterant, and cautioned the agency not to put too much credence in consumer complaints.

The company’s outside consultant had this to say in an email addressed to Joel Sher, Vice-President of Evanger’s, dated February 4, 2017.

I am dismayed by CVM’s determination. Low levels of Pentobarbital have positive uses in treating seizures and insomnia, both in humans and animals. Those who made the decision are obviously unaware of FDA’s 1998 study that found Pentobarbital in almost 50% of the dry dog foods tested and made a determination at that time that residues of Pentobarbital were acceptable.

Evanger’s consultant made reference to a 1986 fraudulent complaint targeting Gerber’s baby food before summarized the company’s thoughts regarding consumer complaints in the following words, taken from an email dated February 17, 2017.

Complaints cannot be trusted! Once a complaint hits the press unscrupulous people will line up complaining hoping for a payout. Back in 1986 FDA did not have the Office of Criminal Investigations to conduct follow-ups at complainants to interrogate them to determine if their complaints were legitimate or not. Today FDA does have that ability and, perhaps, some of the complaints against Evanger’s and Against the Grain should be investigated further by FDA. I would really caution FDA about coming out with a press statement about receiving ‘many’ complaints against these products unless a comprehensive analysis of the complaint is done first.

In a March 3rd email, Evanger’s attorney expressed concern about FDA’s press releases, and asked the agency to give Evanger’s the opportunity to ‘address the issues’ prior to issuing a new public alert, as follows:

Please recall I represent Evanger’s. On its behalf, I’d like to request that the FDA communicate to and work with Evanger’s after the completion of any investigation or the discovery of any new information or questions so that, prior to any new press release from the FDA, Evanger’s is given the opportunity to address the issues. As I am sure you are aware, an FDA press release has significant impact in the market; this is obviously the FDA’s intended effect with the goal of protecting the public. This is indeed the goal the FDA and Evanger’s share.

Later in the same email, the attorney wrote,

It is for this reason that we ask that, Evanger’s be given the opportunity to address new questions, issues or concerns before the FDA issues an independent release. If this is not possible, I believe Evanger’s would be entitled to know why so as to preclude even the appearance of arbitrary or capricious action.

On June 29, 2017, FDA issued a formal Warning Letter to Evanger’s, listing the various violations of the Federal Food, Drug & Cosmetics Act documented during the agency’s January inspection of the company’s facilities.

I am responding, to the letter that your office sent to Evanger’s Dog And Cat Food Company, dated June 29, 2019. The reason is the FDA has made false Allegations against Evanger’s in the following way: [redacted by FDA].

The anti seizure medication contained 30 mg of phenobarbital not 15 mg. The medication has since been recalled by a company called Truxton because of mislabeling. [redacted by FDA]

Again the FDA jumped the gun when Evanger’s got blamed for the dogs deaths.

5. The FDA came charging in like a bull, and the FDA failed to ask about the medical history of the dogs. The phenobarbital that you found came from a labor dispute between the meat supplier and its employee.

Before you make any more false and misleading information about Evanger’s, you need to check your facts. As you have caused thousands of dogs to lose a perfectly safe free meal. Please correct your letter and investigate the new facts in this case. Thank you [redacted by FDA]

Ps. Let me also make it clear I am just a concerned consumer writing this letter by myself.

In October 2017, the company and FDA were still in correspondence regarding the destruction of the recalled products. An October 18, 2017 email from FDA to Evanger’s attorney provides a window into some of the ongoing issues.

As you may know, FDA initiated an inspection at the Evanger’s Markham, IL facility on Tuesday, October 10, 2017 (and is still currently in progress). According to our investigators, the firm has approximately only [redacted by FDA] pallets of recalled product in their possession at this location. The amount of recalled product originally inventoried at the firm in February 2017 by FDA was approximately [redacted by FDA] pallets of product. The firm stated they are destroying the product by discarding approximately [redacted by FDA] at a time into their regular trash bin and covering the product in trash; the trash is then collected per their regularly scheduled pickup. The firm has not provided any documentation or evidence that the product was destroyed; however, Chelsea Sher stated on the second day of the inspection that some of the product has been disposed of at a landfill with documentation. Documentation of the landfill destruction has not been provided to the investigators either. According the investigators the firm is also not rendering the product unsalvageable when the product is thrown into the trash.

Relations between FDA and the companies it regulates can be difficult. Fortunately, not every recall situation is fraught with the controversy and confrontation that characterized the interaction between Evanger’s and FDA.

A final note: All of the excerpts quoted above are ‘as written’ except for the indicated redactions by FDA. No attempt was made to abridge the content or correct any errors of fact, spelling or grammar.