August 4th, 1914. Archduke Ferdinand was dead – slain by an assassin’s bullet on June 28th. All attempts to stave off war had failed.

“What am I doing on this street corner?” Reuben muttered. “I’m too old to be hawking papers. This is MY fight.” But, Reuben knew that his parents would never give him permission to join up. He was sixteen – too young to enlist without his father’s consent.

Reuben was born in England, the youngest of seven children.  The family had emigrated to Canada just two years before. Now the Mother Country was in trouble and Reuben had to help.

As he stood on the corner of Saint-Catherine and Peel – copies of the Montreal Gazette bundled under his left arm and his voice growing hoarse from shouting the headlines – Reuben made his plans. After selling the remaining papers, he would have just enough cash for the train fare to Cornwall, the first town of consequence across the Quebec/Ontario border. One hour later, he walked briskly into Central Station. He was in luck. The next train west was just about to leave.

In three hours, Reuben was standing before a recruiting desk that had been hastily set up in the Cornwall train station. “Name?” the sergeant grunted, not even bothering to look up.

“Sign here and take a seat. The bus leaves for camp in an hour.”

After six weeks of basic training, Private Joe Lewis (a.k.a. Reuben) boarded an eastbound train, together with a contingent of other newly minted soldiers. Upon arrival in Quebec City, the troops transferred to a ship bound for England.

The Germans, however, had other plans for Reuben and his comrades.

One doesn’t hear much about submarine warfare in World War I. But the threat was real. A German boat torpedoed Reuben’s troop ship just a day out of Southampton harbor. Although the ship was badly damaged, most of the men were able to escape immediate drowning. Reuben found himself in the water, clinging to the side of a crowded life raft. After a few hours in the frigid North Atlantic water, he and the other survivors were rescued by a British escort ship that had lagged behind the rest of the convoy.

Neither his unceremonious dunking nor the rigors of war dampened Reuben’s enthusiasm for adventure. In 1939, when Canada entered World War II, Reuben – by then a married man with two children – was back at the recruiting office. He revived his Joe Lewis alter ego and, although technically over age, talked his way back into the army as a batman – an officer’s orderly.

Friendships made in wartime last forever; the ties between Reuben and his military mates were indestructible. Every November 11th, for as long as his health allowed, Reuben and his friends would march together in the Remembrance Day parade on Montreal’s Dominion Square. And every November 11th, at precisely 11:00am, the massed veterans of two world wars would stand at stiff and silent attention as the bugler sounded Taps.

A Note of Explanation: The Runaway is fiction, but is based on the life of my great-uncle, who was too young to enlist for World War I and too old for World War II, but who “joined up” for both.

The following poem is dedicated to the memory of all who fought to defend their homes, their families and their countries. 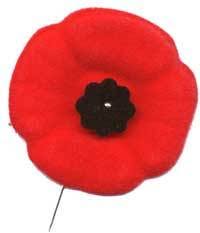 In Flanders Fields the poppies blow
Between the crosses row on row,
That mark our place; and in the sky
The larks, still bravely singing, fly
Scarce heard amid the guns

We are the Dead. Short days ago
We lived, felt dawn, saw sunset glow,
Loved and were loved, and now we lie
In Flanders fields.

Take up our quarrel with the foe:
To you from failing hands we throw
The torch; be yours to hold it high.
If ye break faith with us who die
We shall not sleep, though poppies grow
In Flanders fields.